A few weeks ago, during the AWP conference in Los Angeles, the Blue Skirt Productions team asked participants to submit microfiction on post-it notes for a chance to be published online. Below are the chosen entries. Enjoy! 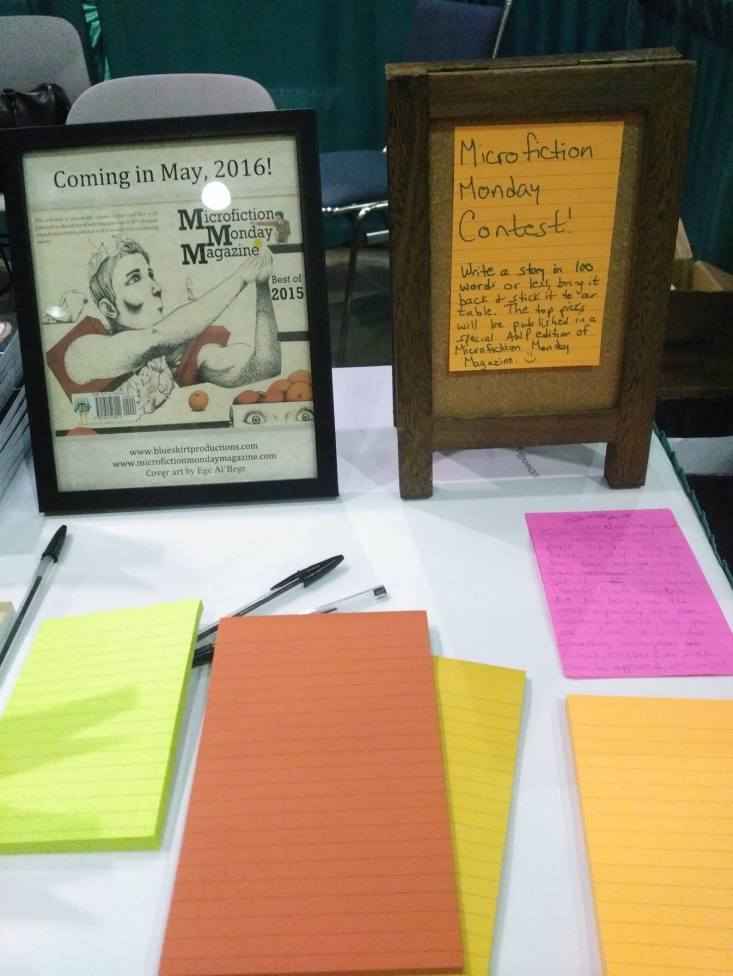 When Victoria saw the possum, she knew it was her dead husband. He hunkered in the apple tree, staring at her as she carried clean laundry past.

She remembered once walking down their wooded driveway, finding a young possum frozen, mouth agape in a stilled scream, sharp teeth revealed. She felt pity, but when she returned from the mailbox the creature had vanished. Playing possum.

She thought of his empty casket beneath the ill-fitting soil where just yesterday she had left fresh chrysanthemums.

She stooped for a rock, aimed for the eyes.

The train comes in the dark. It is longer than your room and mostly made of your drooling jaw. The wheels are uneven, and not as white as they once were. A woman sits in the tongue soft seat, holding a suitcase of your dreams tight between her knees. She is going home.

Someone pissed “God” on the sidewalk in high-class poet letters, and the liturgy is rapidly drying in the Los Angeles sun. The moment is so perfect, so symbolically ironic, that I trod on the O, and walk away with God dripping off the heel of my shoe.

The unofficial roof tour of our hotel was in exchange for a pineapple hard cider and a cupcake. The attendant’s hard day led us into a restricted area of our Shining-esque hotel, where we walked up concrete steps to what he called the “Gotham City view.” Empty beer bottles lined the satellite dish we squeezed around for the black mundane outlook. I could see the darkness he had referenced perfectly. A city with so many stars, but no real light was shining through. I took a single picture of a moment unable to be captured, and we took another drink.

Red as Blood
by Savannah Ridgley

It would be cliche to say her lips were as red as blood. But it was not just the pink of her lips, pristinely layered with lipstick, most of the lower half of her face was coated with a color as vibrant as the blood that swells from my hand when a crushed can becomes too sharp. No longer though the color of her blood. Her body stiff and blue and contorted. The news says the alcohol and cold together crept, attacked, and sedated. Still, as I watch from my sofa, I raise another bottle to my lips.

This last week, during the AWP conference in Minneapolis, the Blue Skirt Productions team asked participants to submit microfiction on post-it notes for a chance to be published the following Monday online. Below are the chosen entries. Enjoy! 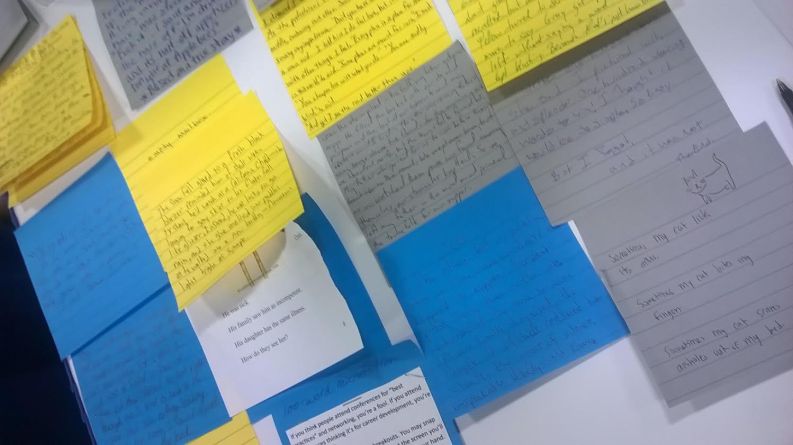 The Storm
by Sam Snoek-Brown

When the storm piled in the Gulf, my father gathered eggs. He filled the basket with carrots and pawpaws and the last of our biscuits, and my sisters and I hid in the attic where my father sang songs above the flood. In the morning we headed north, but the townsfolk found us. My father whispered for us to run before they beat him in the road. We wept over him, but as we watched them pass our food among themselves, our stomachs knotted. So we left my father in the mud and joined the townsfolk for supper.

My Cat
by Sierra Lomprey

I Would Have Settled for Cheese, but…
Rachel Knuth

Feeling good, I picked up the mozzarella stick. A long, unruly black hair was stuck to it. “Fuck it,” I said and pulled the hair off. “I’m drunk and it’s half off appetizers tonight at Applebees.”
*Based on a true story.*

Feet off the Floor
by Tia Clark

Chrisette puts her feet up on the coffee table to avoid the floor, though she knows, intellectually, that it’s not made of lava. Her brother is years and miles away, too far to yell at her to jump from couch to couch to save her life. And her girlfriend’s at work, too far and too busy to yell at her to get her feet off the goddamn table, stop texting at dinner, not that bra, etc. And Chrisette’s toes are just the right pink. And at this vantage point, this distance, her legs look almost completely straight.

If you think people attend conferences for “best practices” and networking, you’re a fool. If you attend conferences thinking it’s for career development, you’re fooling yourself.
Sure, there may be standout breakouts. You may snap pics of a speaker’s revealing slides. But the screen you’ll scan most during the sessions will be the one in your hand.
Certainly you’ll meet people. But millions don’t flock to conferences for networking alone. The truth is they flock to fuck.
At night hotels become hotbeds for hedonism. A brief escape. No kids, no spouses, no strings attached.
Shocked? Interested? I’m in Room 603.