This week’s artwork is “Coca Cola Tango” by AF Knott. 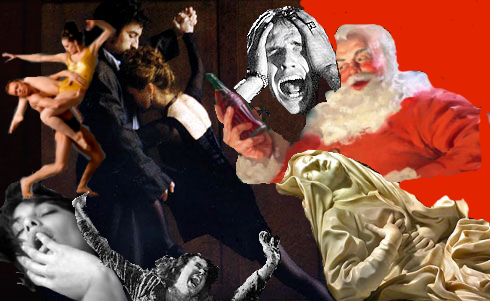 When tantruming on account of something small, but motivated by reasons big, Mom would go through the kitchen drawers and throw spoons at my father and me. Always spoons. Never the forks or knives, and I thought that was a nice gesture. Still, she never tried to discipline me. She just let me twist her static hair as she slept under white duvets for most of my adolescence. My father always said she was ill or tired, but I saw it in him, too. Sometimes I’d watch him dip his face into a bowl of cereal until his fingertips relaxed.

The Bug
by B.E. Seidl

I looked at the bug, and he looked at me. There was only his head, the rest was still under my skin. For days I had anticipated this moment, when I would finally stare into those colorless eyes. I had felt him moving inside my arm, had watched him growing under an itching bump. All I wanted to do was rip his head off, but I had to wait until he came out on his own. It seemed like hours that we were eying each other. Finally he squeezed himself out and fell to the floor.

On the bus to Baltimore she bites her nails and listens to slow music in her headphones, slumping in the red hoodie he paid for, watching traffic out the window as the sky goes dark. Her boots are still muddy. Both her eyes and cheek are deep, inky purple, veined bilirubin yellow, starting to heal. Her mouth is slightly open because she still can’t breathe through her broken nose. Her cellphone and wallet are somewhere in the Susquehanna River. The gun in the backpack on the seat next to her is missing four bullets.

Café Arusat was like every other café in Tripoli. Men loitered for hours over strong coffee and debates. Hakim had run the café for five years. According to custom, he should’ve bonded with the same twenty men occupying his ironwork chairs every afternoon, but generations passed through too quickly. They died fighting for Gaddafi or the rebellion. The survivors fled to Europe. Or jihadi camps. Those who stayed were blown up or murdered. Whenever a patron disappeared, Hakim scrubbed his old chair with bleach, as though the disinfectant could scare away the djinns and the ghosts of his broken country.

Though I distinctly remember going to bed last night, I am somehow fully clothed and on the bathroom floor when I wake. I get up slowly and look in the mirror. I am pale and haggard. After splashing water on my face, I exit and find my wife sitting at the kitchen table, looking frustrated.
“The police brought you home again,” she says. “You were wandering the street eating a box of Cinnamon Toast Crunch.”
I want to believe she’s joking, but I taste cinnamon when I swallow.
“Wasn’t me,” I say.
“Never is,” she says.