This week’s artwork is by G.J. Mintz 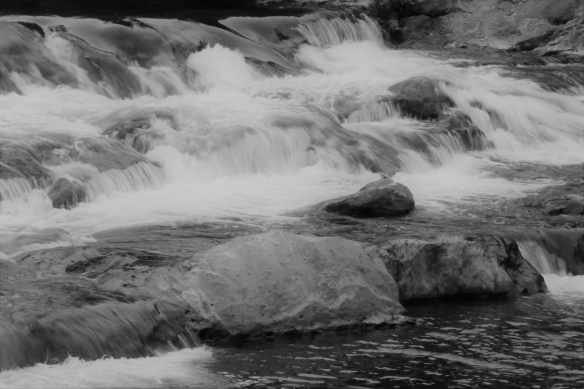 Back to the Beach
by Joseph Yenkavitch

Maria sat stiffly on the multi-colored blanket leaning back on both arms her right foot fidgeting into the warm beach sand. Her husband, one hand holding onto little Grace, ran into the water while the more independent Kathy splashed nearby. Maria watched as the turquoise water encircled the children’s bodies. She sat upright as the waves climbed and lifted them. Catching her husband dreamily gazing out to sea, her hand grabbed a knot of cloth. Kathy waved as frothy water covered her. Maria leaped up remembering how Bobby had waved going under. But Kathy surfaced with a squeal of laughter.

It was dark inside the prison yard despite the morning sun. Dressed in another’s Sunday best, Jeb Sanders trod heavily up the scaffold steps. No crowd had come, only the law and the faith, the latter of which was represented by a lone figure standing before the trapdoor. Moving to his spot, he made a quick study of the priest. Pale, baby-faced, the leather spine of his bible uncracked. His holy garb, though clean, was too long and fell past his feet, giving off the impression that he was floating. “Hey” Jeb said, “Mind showing me how you do that?”

A Slow Demise
by Seminare Ta’afua

My eyes opened yet the darkness did not go away. I lifted my head but it bumped into the ceiling. I moved my feet but could not bend my knees any more than a few degrees. Turning was also obstructed. I realized my demise and start to feel my tears roll down into my ears. I knew yelling wouldn’t help but impulsively- maybe by fear- I screamed out as loud as I could. I maneuvered my arms to allow for prime pounding position and proceeded to hit the coffin ceiling repeatedly. It didn’t take long until dirt started sifting through.

The Cockroach at the End of the World
by Jim Doss

He wants to be called Bernie, but no one’s left to speak his name. He stares from those sad Franz Kafka eyes, a body shriveled as if he’s lived for years in concentration camps. He combs through building rubble, nibbling on barbecued people, not bothering to hide since the bombs went off. Mutually assured destruction—some deterrent. His cells absorb radiation, mutate, then mutate again. He feels sick, both at heart and in mind. He isn’t transformed algae crawling out of a pond at the beginning of time, but he is the new Adam in search of his Eve.

She spotted it first through tears. It was a hiccup moment. Nothing significant, just something to notice; a small leaf sprouting against her grey wooden fence. The next morning, she woke up and cried. When the tears stopped, she saw two; a week later, three. Since then, she would cry in her empty double bed, then stare out her window, counting the leaves as her cheeks dried. Months passed and no longer did she cry, but one day she tossed her heavy duvet aside and rushed outside. She took hold of the blossoming vine in a white-knuckled coil and ripped.