Special thanks to Jessica Standifird for her editorial assistance. This week’s artwork is by Marylea Madiman. 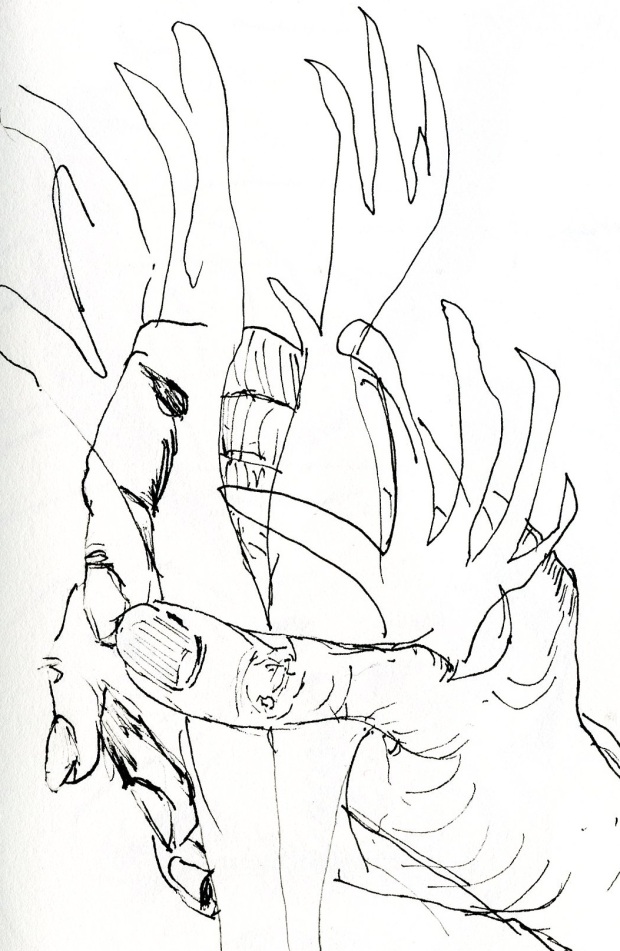 The Devil’s in the details. He’s in the cupboards, too, waiting for idle hands to edge inside and prod the prince of darkness into action. He was there the day Judd killed all those roosters. Judd believed that Jesus had commanded him to wring feathered necks until the squawking stopped. Unfortunately for Judd, Christ has no need for dead birds. The Devil, on the other hand, loves a good sacrifice.

The Darkness
by Brian Schaab

I see the tendrils of midnight stretching out towards me. Grasping, groping for me, or are they beckoning, reaching towards me to envelope me in a warm embrace? I keep walking, trying to fight against it. Color has left me. Light has left me. Only a few feet around me resist the growing shadow. Something passes in front of me, it turns, black eyes staring, and smiles. Color and light radiate out of that smile. The darkness is thrown back, driven before that smile. She turns and walks down the street, fading into the New York bustle. The unknowing hero.

Mornings were quiet now. Carl Saebo had never liked arguing, normally avoided it at all cost, but sitting alone at the table was too much stillness, like a warm summer day when the heat becomes stifling from no air movement. Life was different. His wife had passed before him and that was not how it was supposed to be. He lit another cigarette and drank deeply from his coffee. He wondered where sixty-four years of his life had gone, how each had blended and passed, like rivulets after a hard rain running together and disappearing in sand.

The dying started in the early evening. Nights stretched cold and long and the fire needed wood, sending Llewellyn out to bring down trees. He had become near an expert. The angles were easy, though there were always variables. A railroad spike driven into the old growth, to defend against loggers long gone. The saw’s chain caught and exploded with a high squeal, lashing out and slashing his chest, neck. He weighed his options as he leaned against the unfelled tree. The fading sun left a gash of purple and red across the sky.

Red light pulsed through the windshield, the thump of Jenny’s playlist as the Buick stopped, shuddering. “Again!” a voice laughed, yelled and we were out, screaming around the car. I ended up in the backseat. Jill leaned in, kissed me hard, tongue darting. I tingled – less from the kiss than the whiskey kicking in. J.D. was driving now, his eyes wild, warm from the fifth we had split. I grabbed Jill and returned the favor. Harder. And the whole world turned green. I hit J.D. in the shoulder. “Punch it!” I yelled. Jill laughed, pulled my face towards hers.