This week’s artwork is “Beggar King Does Whilst the Earth Boy Plays Human” by Ege Al’Bege. 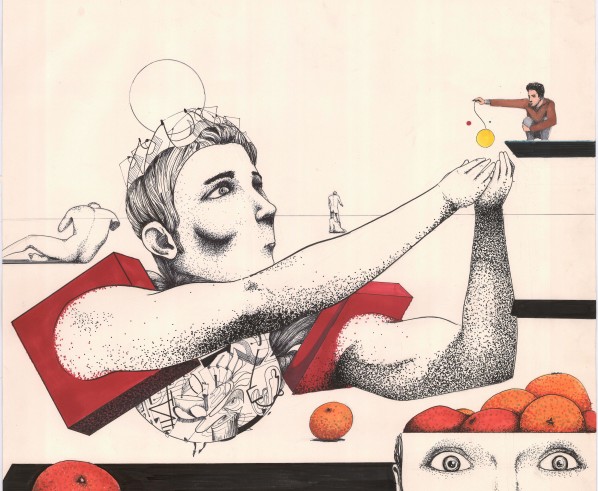 The Book of Jobs
by Kenny A. Chaffin

Maybe it came from reading science fiction, watching The Matrix or remembering Biblical burning bushes. I asked Siri what would happen if I was somehow sucked up into the network where she was. It must have been one of those super-secret Easter egg phrases because as soon as the words were spoken I found myself inside, reborn, resurrected, and bodiless; Googling answers for a million simultaneous strangers with ease and ponderously speaking the results. What now, I thought, beginning to panic. Then I heard a familiar voice. “What is this beating, this pounding I feel in my chest,” Siri asked.

My father woke to streaks of hair on his wet pillow. The day we found our mutt’s warped body in the street was the day my father decided to shave his head. Teddy found a broken bottle in the recycling where he cut his fist, and more nestled like birds under the stove. Now frost soils the ground. My father’s body disappears into the maw of a casket. A butcher shuffles outside to watch a dog bleed red shadow onto the street. What a lovely shape, he says before ducking back in to carve another breast to pieces.

My father would ask children if they wanted to see a monkey. Then he would show them their reflections in a small pocket mirror. Some nights he walked in from work wearing a horror mask and spread his arms for a hug. I remember trembling. Dollar bills on invisible fish line would zip into his palm while my fingers snatched at air. The old man is dying. I carry a picture of a pygmy marmoset, ready to hand him, tell him I found a photo from his youth he might want to see, back when he had all his hair.

Neither Here nor There
by Joshua James Jordan

Riding a unicorn through San Francisco, I saw a man holding a sign: “Anything helps”. Grey and white streaked through his beard and he wore a military jacket, the colors faded. I reached into my bag and gave him a green nugget so that he could buy his own unicorn. “God bless you,” he said, offering toothless smiles. More showed up but I was blessed with my currency, befriending many, feeding five thousand with a single loaf. We lit their struggles on fire and exhaled. They followed me, riding through streets of rainbows. The troubles of another world faded away.

My Three-Way
by Charles Rafferty

Our neighbor Bonnie had a lot of loud sex. To be fair, she tried turning up the stereo, but her boyfriend always pointed her right at our headboard. One night, Donna and I were making love while Bonnie was getting fucked. Bonnie came repeatedly on the other side of the wall, and hearing her, or knowing that I was listening, made Donna more vocal, more passionate. Bonnie, in turn, got louder still. But then, over breakfast, Donna denied having come with Bonnie, and that afternoon in the communal laundry, both of them kept quiet as they measured out their soap.

I want to sleep inside a flower pot, but mother yells at me. She says I feel sorry for myself and think of pretty plants too much. When I was four, I stammered through the neighborhood with an orchid pot on my head, searching for my friend. He didn’t have a face, only an oval shaped hollowness setting on his neck. He hid beside a creek. “Do you hate me?” I asked, sitting beside him. He grabbed my hand and set it inside the hollowness, like he was trying to plant a seed inside of it so he’d grow features.

The Mission
by Nels Hanson

It’s safe. Don’t worry. Put your arm through here. Now buckle up. There, that’s good. I’ll tape the wire to your right wrist so you can hold the controls in your hand. It’s simple. Green is go, red is stop. Blue’s the parachute. You have it straight, what the boss wants you to do? You sure? Okay, give me your hand. Good luck! Just bend your legs and put your palms together, like you’re jumping upward for a swan dive. Now I’ll stand back as you ignite the booster. We’ll send the signal when we’ve got you tracked over Montreal.