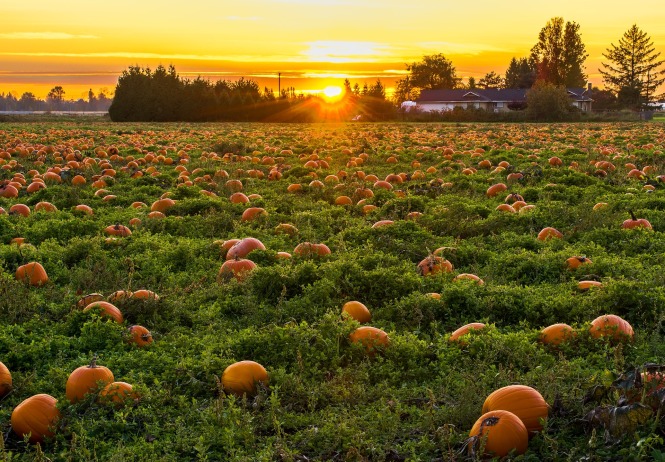 The Field
by Susan Sabry

Pumpkins fell from the sky, and managed to hit everything but a small girl in the middle of a field. There were no witnesses. In fact, every man driving by could only see a small scarecrow. A scarecrow with a summer dress and a mouth stitched in a circle letting out a silent scream.

He is above. I am below. He is air. I am water. He is black. I am white. He lives to hunt. I hunt to live. He has steel. I have tooth. He’s drawn my blood. I’ve tasted his flesh. He wants my life. I want to live. Come noon the third day we will meet on the in between, and once and for all, decide.

This tiny creature is getting larger and harder to feed. She whines out for more of me, cry like a ravaged beast. Sometimes I wonder if she only plays at being small, for I’m certain on my down-low days she could grind me into dust under her smudged heel. Her brother is golden, my sunshine-boy who likes to hide under snow drifts in winter. Sometimes I forget his name amidst the clamor of her wailing. I set him on his feet and he bobbles away, frightened by the sound of her again.

A Single Cloud
by Henry Bladon

It can’t be that bad, he said. I looked out of the hospital window. A single cloud means something bad, I said. You’ll be fine, he said. He didn’t look convincing I gestured to the tubes sprouting from my arm, the bag above my head. That’s nothing, he said. You’re a winner. You always win. I said that sounded tautological. He shrugged. Anyway, I said: You know what they say in all the films? He looked at me hopefully. Tell me it’s something good. I shook my head. So tell me, he said. I put him out of his misery. They say: ‘Let’s get out of here’.

The narrow piece of paper, tacked to a bulletin board, loomed in the room like an ominous hourglass. Among the many markings of accomplishment upon it, there remained, for the last ten years, only one unadulterated item. When reached by the aging man, the implications of finishing the final task, Learn to play the Piano, had become paralyzing. Awoken, revelation from his mother’s past words consumed him, “Only God knows when it’s your time; he doesn’t bargain.” Drawn to the dusty fixture, he struck an unknown key, praying it was his first of many.

In Boxing Class
by Anne Wilding

Seeing me fill up, Richard calls time, takes me outside before I cry. “It’s okay… It takes time… Some people can’t hit.” He doesn’t ask why I stood rabbit-in-headlights while my classmates screeched, “Go on! He’s training to take it! Hit him!” And my sparring partner stood there impassive, waiting for the first blow. Outside, Richard holds me, lets my snot soak his shirt, says, “It’s all right… You are good enough.” And doesn’t ask why. It was the arms I was supposed to go for, at the top. Where it hurts like hell but bruises don’t show.

Before Father Lost his Mind
by D. D. Renforth

Before father lost his mind, we talked of his estate, and he said, “Come every month on the days when it rains, recite King Lear, and it’s yours.” Now we stand beside his lawyer outside his open window on rainy days and repeatedly recite King Lear from start to finish while our father with dementia listens but does not recognize us. When we reach Act I, Scene 4, he puts his head out the window and screams Lear’s line with us, “How sharper than a serpent’s tooth it is to have a thankless child!” and then returns to silence.

Like every Friday, you’re at the pub and you place your bet. You swell bright from liquor. Little to lose, that day you win a yellow boat in which you pack everything you own and take to new sights. You learn to tighten the grip on the oar handles in storming waters and become familiar inside blistered skin. The sea stretches its unclosed wings, inexhaustible territories waiting blue and haunted. Your breaths are as much collectible seashells as are your destinations. You think you must look like a rust flake to whoever watches you claim a draining soul search.

She balled the toilet tissue and stuffed it in the plughole. That should stop the rats. Outside the bathroom window an earnest conversation was taking place. … marbles, she heard. Huh, they think I’ve lost ’em. … in a home. She smacked her palm on the high frosted window. Don’t think I can’t hear you! And I can smell your cigarettes. Rats, rats, the lot of you. Nibbling away at me. Go home to your families. No one’s pitching me out. She glanced in the mirror. Wild hair. Nightie unbuttoned. Who was that?

(“Rats” will be published in Susan’s upcoming book Loopholes set for release in December 2016.)

His car smells like Sweet Pea perfume. He picks me up at 7:50 to take me to school because he’s a gentleman. He kisses me good morning and smirks at me. My mind implodes. I give him my confident smile, the one from fourth grade. Surely he smelled it within those guilty minutes between his house and mine. The scent of Rebecca Vaus’ signature fragrance; the smell that used to follow him in a cloud, linger on his sheets. Surely he breathed it in, bathed in it. He smirks again, knowing I know, and knowing I’ll never say anything.

Life Cycle of the Swimmer Gloria Sherman
by Lynn Mundell

A feral girl, she dog paddles to her mother, gulping the dirty water. Abandoning her JV parka like a chrysalis, she dives, long limbs skimming the surface, a white butterfly. For years, she favors the breaststroke, a sensible method for going the distance, abandoned once in midlife, a year of reckless backstroke, three injured, her included. Settling down again: swim, flip-turn, breathe — 25, 30 laps left, God willing. In her last summer, she crawls down the lane, swimmers behind her like cars trailing an RV. If she can, she won’t return to the earth but rather die in the water.