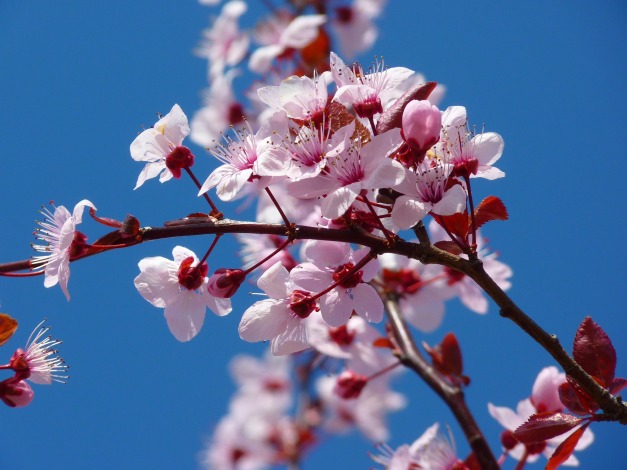 The Lover Crowned
by Reece Taylor

He strips from his garden the peonies and weaves a crown, then hurries towards the hills where his lover waits. In his heart he knows there is no greater gift than this. He passes their old schoolhouse along the way, and the field of pomegranate trees where they kissed and aged. He recalls that sweet, everlasting feeling. By evening, he arrives to find his lover wrapped in vines—such a wild thing now—and he steps forward with the crown, arms outstretched, and rests it over the pale blossom sprouting from a crack in the stone slab.

The Young Woman and the Moon
by Mir-Yashar Seyedbagheri

She’s always trying to get to the moon, to live there. To start a new life, undisturbed. Every night she walks, treading the same old paths, away from home, from her father’s mustache bristling like a porcupine, from the scent of abandonment and perfume. She walks through the quad of the old university, down the train tracks, and the moon reaches out. “Come to me,” it whispers soothingly. She keeps trying. No success. One night the moon disappears, leaving her in the darkness. All she can do is turn around, walking in the other direction towards what, she cannot say.

Man on the Bus Eating Fruit
by Alastair D Paylor

He ate the banana roughly. Chomping down so that son of a bitch disappeared in huge chunks. He watched them, watching him. They were uneasy, and their chatter had died away. They were relieved to press the bell and get off the bus when their stop came, but as they alighted and the bus slowly started to pull away they couldn’t help looking up. He was still watching them. His forehead pressed against the window pane, biting into an apple.

I can’t. I can’t go to yoga. It’s evil. Not weight lifting evil—all strain and bellow. It isn’t nefarious like Zumba—drums, up-tempo music, all the thrusting. Yoga isn’t the wet, drippy evil of a sauna. Towel-clad women chatting up smoothie recipes while sweat drips into their cleavage. In and out, fifteen minutes, leaving dual half-moon ass prints to dry on the cedar boards. No, yoga is glowing-skinned, water-guzzling, twenty-something evil. Insidious as a chiropractor. Crack! One session’s all it takes to show where the tension hides.

A Tight Fit
by Abby Burns

I am a master of false equivalency. For instance, I tell my boyfriend, if I can push a baby from my vagina, surely you can shove a car up your ass. The baby is born cesarean, but it’s too late. There’s a hood ornament wedged near his prostate and he needs surgery to save him from pleasure. Here’s the problem with men who take you literally: you both end up drugged and sliced open. Now I change both dirty diapers and colostomy bags.

Leave a Reply to Kenny A Chaffin Cancel reply