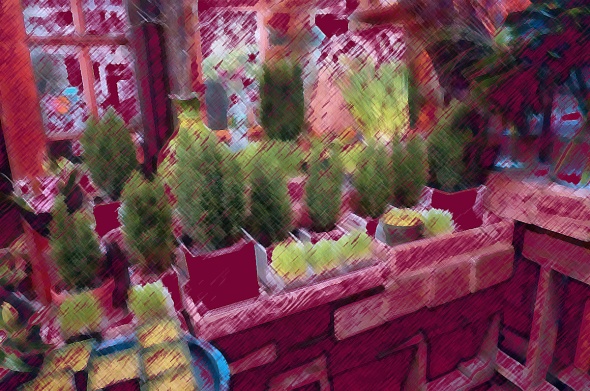 She could barely see her neighbor’s yard. She had to open the blinds all the way and stand just so: over to the right side of the window, hugging the wall while looking sideways. But the view felt unavoidable. She wanted to spend more time in her own backyard, checking on the cacti, pruning the lantana, watching hummingbirds flit in and out of the spires of autumn sage. But her job, her role, had become inseparable from herself, and so she stood each morning, pressing her chest against the textured drywall. Waiting patiently, reporting to no one.

He laid his forehead against the backseat window and undid his bow tie. Beside him, she cradled the smashed up layer cake in her lap like a dead baby.
“We can fix this,” she whimpered, trying to convince herself. “We can still fix this.”
He feared the same thing that she did: that life was crumbly, that some things cannot be fixed. So he reached for her arm and gave it a squeeze. “I know.”
The cabbie, a real professional, suffered their boozy nonsense in silence.

The Tallboy
by Chad Greene

Doubt that anyone on the streetcar clattering across the steel bridge noticed us at the edge of the river, let alone the circle of empty Pabst cans we had arranged around the base of the white cross. I had loved him the most; that’s why I left the tallboy. It towered over the 12-ouncers everyone else had left.

A Song Before Dying
by C.C. Russell

The twang of another guitar through another bridge bringing us back again to the familiar chorus. Someone says “Didn’t we just leave this party?” as a joke, but it falls flat. Outside, over the music, we can hear them scratching their way through the trees. We can hear them coming; closer every second. No one thinks to reach over and turn off the stereo. No one thinks of anything that could save us.

That ubiquitous moon lights dark heavens and reflects now as it did then: the burning hole in me; my corrupted innocence and the lengths to which the word love could be stretched. When my back was no longer able to bear that shameful weight, I shed bloodied sheets and a childhood of midnight lies. But after five years, I still cannot outrun that moon.