This week we have a special edition of Microfiction Monday. The following six stories are actually micro-nonfiction pieces about one man’s experience during the Vietnam War.

Jack Hermann was born and raised in the Maryland suburbs of Washington, DC. He received a BA from a small liberal arts college and was shortly thereafter drafted into the US Army as a 1A-O (conscientious objector who would serve but not bear arms). Nearly all 1A-Os were trained as combat medics. Jack served in Vietnam (1969-70) with the 1st Cavalry Division as a medic; he never carried a weapon. He was awarded a Purple Heart and two Bronze Stars. After the Army he attended graduate school and earned a Ph.D. in Social Welfare Policy. The last 25 years of his professional career were spent in substance abuse prevention research. He is retired and lives SW France. 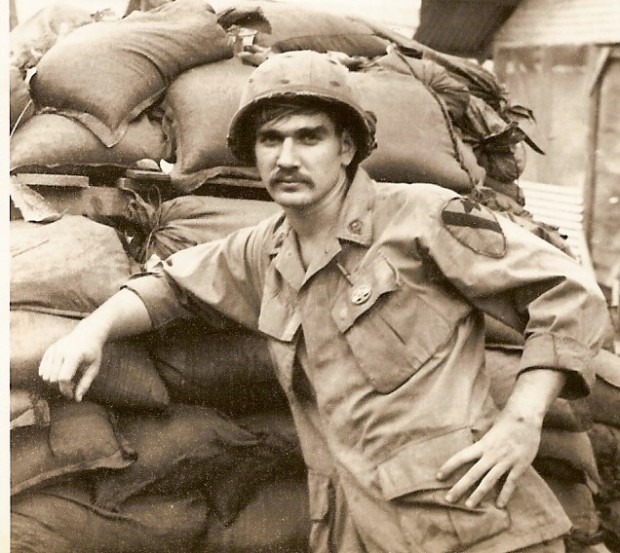 He could see the body clearly from his position about 10 yards away. An enemy soldier killed about an hour ago in a brief firefight along a jungle trail. They waited in the thick undergrowth for someone to retrieve the body. Butterflies covered the dead man’s face and had eaten away much of the soft tissue—eyes, lips and nostrils. No one came, so they soon moved out quietly. He was new in-country and didn’t know butterflies were carnivorous.

“Get out! Get out!” screamed the door gunner. The chopper was still six feet off the ground, but taking fire. All of the grunts jumped, ran several yards then dropped. He did the same, releasing the straps on his rucksack when hitting the ground. He had difficulty determining sound directions ever since his eardrums had been blown out a few weeks before. He checked the direction the others were firing, then pushed his rucksack between himself and the incoming rounds and waited for the inevitable cry, “MEDIC!”

Back to the World

“MacZeal is dead, decapitated by a mortar round,” said the platoon Sargent. So that’s whose body he had stepped over a few minutes before. He hadn’t recognized the headless man. Strange, he and MacZeal had shared a canteen cup of coffee and a can of C rations less than twelve hours earlier as they waited for choppers to pick up the platoon and return to the firebase. They had talked about what each would do when he got back to “The World.” Well, MacZeal is going back sooner than he thought.

He sat by a clump of bamboo crying. He had just killed a man. He had been walking point and suddenly there was movement a few yards ahead. Reflexes and training took over. Now a dead enemy lay nearby and he cried. A few in his platoon tried to say something to help, but most said nothing.

“Charlie has had his chance at you; he won’t get another.” That’s what his captain told him as a Purple Heart was pinned onto his fatigue shirt. He knew his captain was wrong. Many of the men in the battalion had more than one Purple Heart. And then there was Sargent McKnight; he had been wounded seriously twice but sent back to the battalion after each time. A few weeks after his last return an AK-47 round hit him in the throat and blew off the back of his head. That made three Purple Hearts.

It was a minor wound. A bullet had hit the man between his thumb and forefinger. Good bleeding but not pulsating, so no artery involvement. The medic cleaned and bandaged the wound as best he could while they sat in a dark foxhole. “Sorry,” said the medic. “I don’t have anything for the pain. Battalion won’t issue us Darvon or morphine anymore because guys are stealing it from our aid bags. We’ll do our best to get you out in the morning on a chopper when we get resupplied with ammo. I’ll be back later to check the dressing.”